skip to main | skip to sidebar

Proposition 7, a California initiative to mandate utilities to generate minimum levels of electricity from renewable sources has environmental groups teaming up with their long-time enemies -- power companies -- to defeat it.

Is this a case of a badly written initiative or are the greens in a snit because an outsider has walked in and stolen their thunder with a measure that the environmental groups can't grab political credit for themselves?

According to a July 4 article in the San Francisco Chronicle: "A November ballot measure to boost the amount of renewable energy generated by California utilities has attracted a wildly diverse group of opponents - from the Natural Resources Defense Council to the Democratic Party and Pacific Gas and Electric Co.

"'It's kind of like I'm uniting every warring group in the state', said Jim Gonzalez, the former San Francisco supervisor who's behind Proposition 7, the Solar and Clean Energy Act of 2008.

"The measure requires all California utilities to generate at least half their power from alternative energy sources such as wind, solar, biomass and geothermal by 2025, well above the 33 percent level Gov. Arnold Schwarzenegger wants to see by 2020. Utilities currently must reach a 20 percent goal by 2010.

"'This does no harm to the environment and only toughens up the rules we have now,' Gonzalez said."

The Chronicle pointed out that environmental groups such as the National Resources Defense Council (NRDC), had been working on energy legislation for a long time, but had not been consulted by the Prop 7 sponsors.

"There was very late consultation," said NRDC's Ralph Cavanaugh in the Chron article "We asked them last November to step back and take a look at the measure, but by then they already had a finished product."

"The initiative sets up such a detailed plan for dealing with renewable energy and siting and building the new, greener power plants that it opens the way for many unintended consequences, Cavanaugh said. "If you're going to legislate at the ballot box, keep it simple, don't write 70 pages," he added. "Our objection isn't to their good intentions, but to their bad initiative.

"But is that the real issue? Cavanaugh gives no details on why the initiative is "bad" nor why 70 pages is necessarily a reason to oppose the measure. 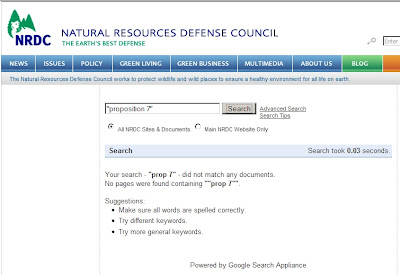 A search of the NRDC web site turns up no mention of Proposition 7.

On the Other hand, the "Yes on Prop 7" website offers a wealth of details which don't seem congruent with the NRDC concerns.

Could the real reason be resentment over outsiders injecting themselves into an issue the NRDC and its allies "owned?"

Might it be embarrassment that citizens -- tired of the Greens and the do-nothing legislators in Sacramento -- took matters into their own hands?

Would this have happened if Prop 7's sponsors genuflected to those who have amassed vast political power in California?

Does Prop 7 pose a threat to back-room horse-trading that the NRDC and its allies feel they -- and they only -- are entitled to?

Proposition 7 can be read in its entirety at the California Secretary of State's web site.

In addition, the non-partisan analysis of the measure by the California Legislative Analyst's Office does not back up the NRDC claims.

Until the NRDC can detail the specific reasons for its vague reasons, the electorate can only assume it's an ego thing and a political "dog in the manger" issue.

The NRDC's vagueness and lack of transparency on this issue hints of the discredited back-room politics that the electorate find reprehensible.

That hurts the environment and the people of California. And continues a broken political process where scoring political points takes precedence over proper governance.

I just read your post on the NRDC and the green groups opposing the solar bill. The story is not their bitterness, but the funding these groups get from Sempra, PG&E, and Southern Cali Edison.

Over the last few months we have seen so-called environmentalists and other organizations that have nothing to do with energy policy for some reason feeling they have to speak out against renewable energy efforts at the city, state, and federal level.

Some of these groups like CLCV, Center for Energy Efficiency and Renewable Techonologies (CEERT) even have former energy/utility executives sitting on their boards! NRDC's Ralph Cavanagh has a very close relationship with the energy industry and always takes their side.

PG&E, Sempra Energy, and Southern California Edison are all engaged in this practice. I have more back up info and data, links, etc if you are interested.

I would be glad to provide you the references and links. A lot of it I found digging through Nexis and other data filed with the Secretary of State's office. Email at Cleanupcleanenergy@gmail and let me know where to forward the information.

Good job pointing out the details to both. I will pass this along to many many people as a source of honest information.

"Progressive" readers gamed the Google system and blocked new posts for this blog on July 9. I needed to move the blog off Google in order to continue posting.

See this post for more details of this outrageous situation.

Google has allowed me to resume posts, but only with the most eye-crossing "captchas" possible.

They do not respond to their emails. But why should they? They're Google and they do not care.

It also calls into question the suitability of using any other online applications where Google has custody of your personal information.

They can cut you off and simply fail to respond.

This blog is about facts, civility and dialogue. It is not about polemics, rants, scoring "gotchas!"or preaching to the converted.

The Internet has enabled participatory democracy to an unprecedented degree. But the sad result consists of demagogues on the left and right hurling bombs at each other.

That's not dialogue; that's just being Shia and Sunni. And that's destructive. That endangers democracy, not enhances it.

Both extremes demonize dissent. "Evil" becomes whatever the blogger disagrees with. Reason, rational thought and the well-being of the country are mutilated in the process.

There is more at stake here than the personal catharsis of flipping someone off with the verbal equivalent of an Anglo-Saxon salute.

Opinions are most persuasively expressed when based on solid, factual irrefutable data. Only then do you have a chance at changing minds. Otherwise, you're just preaching to the converted.

I do not intend to preach to the converted. I intend to ask "WHY?"

I intend to challenge the demagogues to "PROVE IT." Give me facts, all the facts or go away and stop wasting my time.

I loathe party politics, the party line, and think both major parties are totally out of touch with the electorate.

Third-party candidates in today's political climate -- whether they be Ralph Nader or Bob Barr -- are just spoilers there to elect the other party's candidate.

I have worked as a top aide for a Democratic state governor and a Republican Congressman and U.S. Senator.

I vote as an independent. My favorite political book is Independent Nation which I have reviewed at this link.

I believe that a connection to reality is vital and all-too-often missing from the political drones and droids that control the American political landscape.

And like most Americans, I am liberal on some issues and conservative on others.

As a former journalist and university journalism instructor, I am equally offended by the Keith Olbermanns on the left hand and Ann Coulters on the right.

They and their brothers and sisters rant and rouse rabble but rarely rise above the banal. They are demagogues of different stripes: equally annoying, equally flaky and equally useless for making an informed decision.

I am not interested in getting some "journalist's" opinion. I am interested in facts, context and a complete and unbiased picture -- an increasingly scarce commodity.

Like most Americans, I am in nobody's political bag and will never be put into one. That means I cannot be taken for granted.

This blog is about reality and facts. Stay tuned.